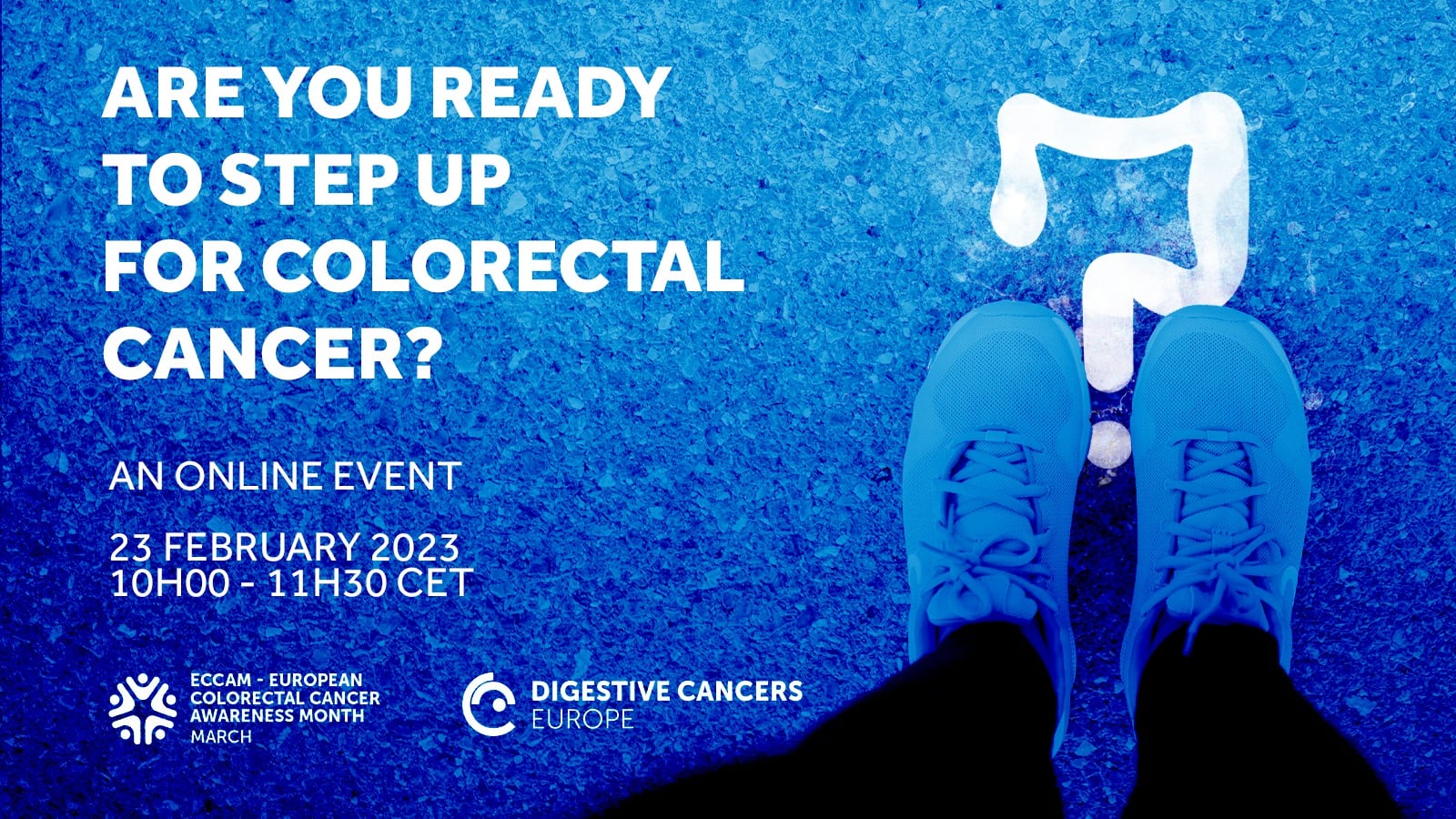 23 February 2023. Be part of the discussion on the importance on all levels of prevention for Colorectal Cancer (CRC).

In 2020 CRC took the lives of 240.000 Europeans, devastating their families and loved ones along the way. CRC is Europe’s second and third most common cancer in women and men, respectively.

At this year’s event, DiCE will launch STEPAPP, a free mobile app that counts your steps. STEPAPP aims to further engage with the general public and provide an opportunity to learn about CRC and ways by which it can be prevented (e.g. by talking about a healthier lifestyle through walking), as well as to raise awareness about Digestive Cancers Europe and its national Member Organizations.

A part of Europacolon and now DiCE since 2012, Zorana has always worked closely with our Full Members and Associate Members. With grace, poise and calm, she is working to help Members’ organisations and DiCE grow.

As CEO, Zorana continues her commitment to DiCE taking on the management of the organisation and ensuring the delivery of its missions and goals. In her past role as Director of Operations she was responsible for the co-ordination and support of Member groups, as well as strengthening the network, through establishing relationships with new organisations. During this she has proven her capacity to deliver successfully. Key projects have included:

Zorana also acts as a public speaker on topics such as patient support, biosimilars and CRC screening. From 2016 until 2018, Zorana served as a Board Member of EuropaColon.

Before working in the Not-For-Profit sector, Zorana worked for 10 years in the pharmaceutical industry, primarily in sales and marketing of innovative oncology drugs as well as on oncology clinical trials.

Along with being a pharmacist and a former cancer patient, Lieve’s career in politics means she applies her medical, patient and policy expertise to her work as Chair of the DiCE Board.

Lieve Wierinck was a Member of the European Parliament (ALDE – Liberal Democrats) until 2019. She was a member of the Committee on Industry, Research and Energy (ITRE). In that capacity, she strove to improve the innovation and competitiveness of Europe.

She was also a member of the informal groups “MEPs Against Cancer” (MAC), and the MEP Interest Group on the Patient Access Partnership (PACT). Earlier this year, Lieve Wierinck received the Parliament Magazine Award for the Best Health MEP.

She also worked as a pharmacist for 30 years in Zaventem. She is a colon cancer survivor.

Andi Cârlan is a 39-year-old Romanian, husband, and father of two wonderful girls. He has been working in the pensions and life insurance industry for over 14 years and has built his career in employee benefits, corporate sales, financial advising, training and consultancy. He’s an active volunteer, civic activist, #bloodfluencer, donor and occasional fundraiser, involved in civic social movements, blood donations, social cases and now – the Ukrainian refugees’ crisis in Romania.

In May 2019 at 36 he received the diagnosis of having Stage III Colon Cancer, which was treated with surgery and chemotherapy. Two years later, in July 2021, it came back in the form of a liver metastasis that was surgically removed in September.

Since 2020, he has been advocating for cancer patients in Romania, helping them to cope with cancer and to understand about disease and their treatment options. He also works to share positive ways of dealing with the new life that cancer brings.

He also writes a blog (in Romanian) that documents his journey with cancer and other social, medical and educational themes.

By advising DiCE through the Patient Advisory Committee he is looking to spread the word further and help others on a European level.

Deirdre graduated from University College Cork in 1980, with a B.E. in Civil Engineering. She completed a diploma in Management Engineering with Trinity College Dublin in 1983. She returned to UCC in 1996 to complete her HDip in Environmental Engineering. Deirdre went on to work with some of the leading engineering firms both here at home and overseas, including Delap & Waller, Roughton & Partners and Arup.

During her time in Leinster House, Deirdre was Deputy Spokesperson on Enterprise with the Special Responsibility for Innovation. She was also the Fine Gael spokesperson on Environmental Information and Protection, and Arts, Heritage, Gaeltacht and the Islands.

Deirdre’s father, Peter Barry, was a Dáil Deputy for Cork constituencies between 1969 and 1997 and served as Tánaiste in 1987, Deputy Leader of Fine Gael between 1979 and 1987 and from 1989 to 1993. He was also a Minister for Foreign Affairs, the Environment, Transport & Power and Education.

10.30 - What Can We Do to Prevent CRC?
Casper Simonsen
Catherine Sauvaget
Ana Ruiz-Casado

Through translational research and knowledge dissemination, we aim to develop targeted exercise training regimes for specific disease groups by applying a translational strategy: “from bedside to bench and back.”

Dr Simonsen has undertaken exercise-trials in patients with digestive cancers, including colorectal and gastroesophageal cancer, with a translational focus to elucidate the biological mechanisms, clinical effects, and practice-based implications of exercise training in the oncology setting.

Ana Ruiz-Casado, MD PhD, is a medical oncologist specialised in gastrointestinal cancer. She has led some research projects in the area of exercise and cancer.

Hana finished B.A. in Psychology at the Lebanese American University, Beirut, Lebanon. She founded SAID NGO in 2019 after losing her husband, Said, at the age of 59 to colon cancer, even though they had a family doctor who used to do annual physical checkups but never asked for a colonoscopy or F.I.T. screening.

Since losing anyone to this cancer is unacceptable because of a lack of awareness, she founded SAID NGO (Decree 324/2016) and named it after him. At the same time, it stands for Spread Awareness Increase Detection (S.A.I.D.) with a three pillars mission:

As Communications Manager, Ruel will contribute to the DiCE’s activities in the domain of events, promotion and internal/external communications to build connections and increase public awareness and ultimately bring value to a more significant number of digestive cancer patients in Europe.

Ruel is an experienced communication practitioner with a demonstrated history of working in several European associations in Brussels. Skilled in communication management, social media strategy and customer satisfaction, Ruel is a marketing professional with a Master of Science in Communication Studies focused on New Media and Society in Europe from Vrije Universiteit Brussel.

His enthusiasm for digital media and communications motivates him to excel while building relationships, organising projects and inspiring optimism.