Our Masterclass series started on July 1 and runs until December as a virtual experience.

Our update in science was attended by over 50 participants on July 7 – thank you for coming and thank you to our wonderful speakers!

How to find the right treatment, at the right time: Microfluidics can help! 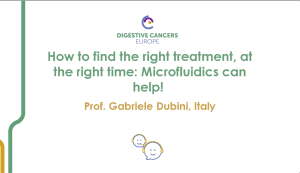 Role of the immune response in early stage colorectal cancers, a new era in precision medicine 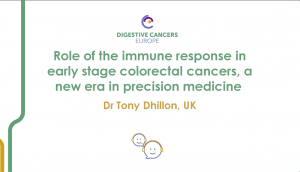 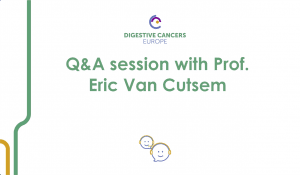 From 2003 to 2007 Gabriele Dubini was the Director of the Laboratory of Biological Structure Mechanics (LaBS, www.labsmech.polimi.it) of Politecnico di Milano. He was a member of the Scientific Panel of the Coordination Centre on NanoBiotechnologies and Nanomedicine at Politecnico di Milano from 2007 to 2012. From 2008 to 2012 he was a member (elected) of the Council of the European Society of Biomechanics (ESB) and the Secretary-General for the 2010-12 biennium. He was the Coordinator of the Biological Engineering section (2013-16) and later Deputy Director (2017-19) of the Department of Chemistry, Materials and Chemical Engineering ‘Giulio Natta’, Politenico di Milano.

Most of Gabriele Dubini’s research activity has dealt with experimental and computational Biomechanics. His research has covered a number of topics, such as microcirculation, the hemodynamic optimization of blood circulation after pediatric cardiac surgery procedures, heat and mass transfer in tissues and medical devices, preoperative planning of minimally invasive vascular procedures. His most recent research interests are in the field of the design and characterization of microfluidic devices for medical and biotechnological applications.

Finding the right treatment for a patient is a big challenge, largely unmet. Today, we administer patients a drug based on the results of large studies conducted previously on other patients, so the treatment is rarely tailored to the needs of the patient, and the molecular features of the specific cancer.

A big step towards a more personalised medicine has been the introduction of organoids, three-dimensional assemblies of tumor cells that mimic remarkably well the behaviour, including the sensitivity to the drugs, of the respective tumor. The dream would be to take the cells from the patient’s tumor, generate organoids, and expose them to several drugs, so that we could choose the right treatment for the patients beforehand.

However, generating organoids is cumbersome. Within the frame of a CRUK/AIRC Accelerator Award, through an international collaboration between groups in the UK and in Italy, the team has been able to generate tiny organoids in small droplets, within a microfluidic device, where hundreds of drugs, and combinations, could be swiftly tested. Using this tool, the optimal combination of drugs could be forecast, bringing to the patient the right drugs, at the right concentration.

Dr. Tony Dhillon is a Consultant Medical Oncologist based at The Royal Surrey Hospital NHS Foundation Trust. He has been a consultant medical oncologist since 2010. He is a senior lecturer in Oncology at the University of Surrey and Imperial College London, looking into new treatment in GI cancers. He treats colorectal, liver, pancreas, biliary, NET and GIST tumours.

Dr. Dhillon trained in medical oncology at Imperial College Healthcare NHS Trust hospitals and Chelsea and Westminster. He has a PhD from Imperial College London in cancer cell signaling, and has been a fellow and a lecturer at the University of Oxford

He has research interests in immune-oncology- currently the chief investigator of the POLEM trial in stage 3 colon cancer.

Dr. Dhillon is experienced with immune-oncology assay in colon cancer patients and uses precision medicine in his clinical decision making for his bowel cancer patients in UK.

During his lecture, Dr. Dhillon will provide information on the role of patient’s immune response in early colorectal cancer and the best approach for patients and doctors to jointly manage treatment at this stage for improved patient outcomes.

Dr. Estelle Cauchin is a gastroenterologist, specialist in digestive oncology and digestive oncogenetics at the University Hospital of Nantes, France. A part of her activity is the management of patients with digestive cancers. The second part consists on the management of patients belonging to families at very high risk of digestive cancer with a goal of genetic counseling for preventive purposes. These two activities complement each other well with an aspect of prevention, therapeutic management and support for patients and their families.

About Her Scientific Update

Dr Estelle Cauchin will help you understand how personalization of treatment can improve patient outcomes and explain what are different tests that are being used through the journey of CRC patient.

Prof. Van Cutsem has published more than 300 peer-reviewed articles in prestigious journals. Eric Van Cutsem is/was a board member of several scientific organizations, such as the ESMO faculty, the EORTC-GI group, PETACC (Pan-European Trials on Adjuvant Colon Cancer), the EORTC and the European Society of Digestive Oncology (ESDO) and the European NeuroEndocrine Tumour Society (ENETS) registry.

Thanks in advance to all the speakers for their time and active participation!

Our gratitude goes to our generous event sponsors!